Welcome to our free jQuery tutorial. This tutorial is based on Webucator's jQuery Fundamentals Training course.

We will cover understanding statements, variable naming, whitespace, and other basic JavaScript syntax.

The first line creates a variable with no defined value. In JavaScript, this results in a special value, undefined. The second variable is initialized to a string value.

Whitespace has no meaning outside of quotation marks:

Tabs enhance readability, but have no special meaning:

There are two types of comments: block comments and comments-to-end-of-line:

JavaScript has a number of "reserved words," or words that have special meaning in the language. You should avoid using these words in your code except when using them with their intended meaning.

Operations on Numbers and Strings

In JavaScript, numbers and strings will occasionally behave in ways you might not expect.

In the above example, when we try to add the string '2' to the number 1, JavaScript coerces the number 1 into the string '1' and then concatenates '2' onto '1'. To prevent this from happening, you can use Number():

Strings in JavaScript cannot be multiplied or divided, so JavaScript will try to convert them to numbers before performing multiplication or division:

Forcing a String to Act as a Number

Logical operators allow you to evaluate a series of operands using AND and OR operations. JavaScript is lazy (or efficient) about processing compound conditions. As soon as it can determine the overall result of the compound condition, it stops looking at the
remaining parts of the condition.

All JavaScript values have a logical (true/false) aspect. The concept that a value is treated as true is called truthy, and behaving as false is called falsy.

The only falsy values are:

All other values are truthy.

Logical AND and OR Operators

By nesting code in if-else if-else blocks, you can indicate which code should run under certain conditions.

While the ternary operator can be used without assigning the return value to a variable, this is generally discouraged.

A switch looks at the value of a variable or expression, and jumps to the first matching case within the block controlled by the switch. At that point, all controlling behavior of the switch is done. All of the code after the matching case will be executed, even that belonging to later cases, unless you put in a break statement to exit the switch.

Loops let you run a block of code a certain number of times.

A while loop is similar to an if statement, except that its body will keep executing until the condition evaluates to false.

The loopBody statement is what runs on every iteration. It can contain anything you want. You'll typically have multiple statements that need to be executed and so will wrap them in a block ({...}). If there is only a single statement, then the curly braces are not necessary, but recommended as a good coding practice. The same rule holds for the other looping tags below.

A Typical while Loop

You'll notice that we're having to increment the counter within the loop's body. It is possible to combine the conditional and incrementer, like so:

A while Loop with a Combined Conditional and Incrementer

Notice that we're starting at 0 and using the prefix incrementer (++i).

This is almost exactly the same as the while loop, except for the fact that the loop's body is executed at least once before the condition is tested.

A do ... while Loop Example

This type of loop always executes the body at least once, since the test is performed after each iteration.

A for loop is made up of four statements and has the following structure:

The initialization statement is executed only once, before the loop starts. It gives you an opportunity to prepare or declare any variables.

The iteration statement is executed at the end of each iteration and gives you an opportunity to change the state of important variables. Typically, this will involve incrementing or decrementing a counter and thus bringing the loop ever closer to its end.

The loopBody statement is what runs on every iteration. It can contain anything you want. You'll typically have multiple statements that need to be executed and so will wrap them in a block ({...}). If there is only a single statement, then the curly braces are not necessary, but recommended as a good coding practice. The same rule holds for the other looping tags below.

There is a special version of the for loop that iterates through the elements of an associative array (or, equivalently, the properties of an object).

This loops through the set of element names within object, so that loopVariable is each name in turn. The associated values would be retrieved as object[loopVariable].

Usually, a loop's termination will result from the conditional statement not evaluating to true, but it is possible to stop a loop in its tracks from within the loop's body with the break statement.

You may also want to continue the loop without executing more of the loop's body for this iteration. This is done using the continue statement.

Skipping to the Next Iteration of a Loop

Arrays are zero-indexed lists of values. They are a handy way to store a set of related items of the same type (such as strings), though in reality, an array can include multiple types of items, including other arrays.

Testing the Size of an Array

Changing the Size of an Array

Changing the Value of an Array Item

Adding Elements to an Array

A lot of online code uses the first approach. Since the indexing is zero-based, the length value coincidentally matches the index of the next available spot, so the 'new' item gets added at that location, and the length goes up by one. The second line uses the object nature of arrays, invoking the array's push method to add an item. This, of course, also causes the length to increase by one.

Note that split(delimiter), while not an array method is also useful. It splits a string into an array of substrings, and returns the new array. Note that the split() method does not change the original string and if the delimiter is not passed, the array returned is of one item, that being the entire array.

Definition: When one of these values is a function, it's called a method of the object. Otherwise, they are usually called properties.

As it turns out, nearly everything in JavaScript is an object: arrays, functions, numbers, even strings, and they all have properties and methods.

An object literal is an object written in a shorthand syntax, using a pair of curly braces ( { } ) to surround a set of properties: value pairs, separated by commas. The values can be literal strings, numbers, booleans, functions, or nested literal objects, or values from variables or other expressions.

The screenshots below show how to create a simple object using literal syntax and to access its properties and methods: 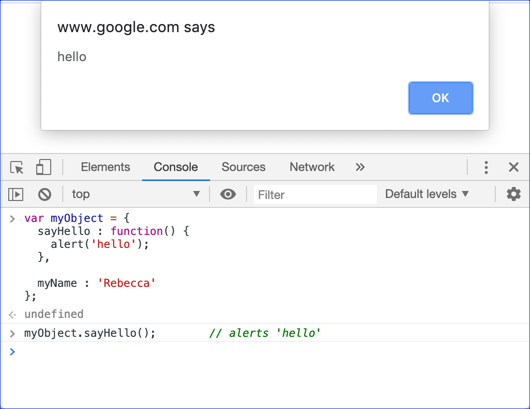 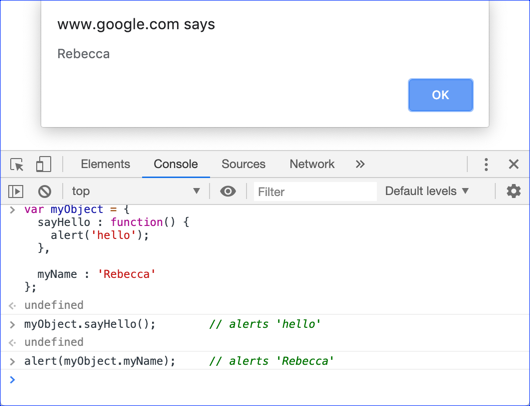 Object literals can be extremely useful for code organization.

Accessing Elements of an Object

You can work with properties and methods of an object by either:

Functions contain blocks of code that need to be executed repeatedly. Functions can take zero or more arguments, and can optionally return a value.

Functions can be created in several ways.

A Function That Returns a Value

A Function That Returns Another Function

Passing an Anonymous Function as an Argument

Passing a Named Function as an Argument

JavaScript offers a way to test the "type" of a variable. However, the result can be confusing -- for example, the type of an Array is "object".

It's common practice to use the typeof operator when trying to determining the type of a specific value.

Testing the Type of Various Variables

jQuery offers utility methods to help you determine the type of an arbitrary value. These will be covered later.

"Scope" refers to the variables that are available to a piece of code at a given time. A lack of understanding of scope can lead to frustrating debugging experiences.

Furthermore, variables that are created inside a function without the var keyword are not local to the function -- JavaScript will traverse the scope chain all the way up to the window scope to find where the variable was previously defined. If the variable wasn't previously defined, it will be defined in the global scope, which can have extremely unexpected consequences;

Functions Have Access to Variables Defined in the Same Scope

Closures are an extension of the concept of scope; functions have access to variables that were available in the scope where the function was created. All of the examples in the "Scope" section used closures to hold on to the value of a local variable declared in the enclosing function.

How to Lock in the Value of i? Use a Closure Combined With Pass-By-Value

But, if we define a function that takes a parameter, and pass in the value of the looping variable. By definition, a method parameter is a local variable to the function. The passed-in value is captured and held for use when the click event occurs.