In this lesson, you will learn how to setup funnels in Google Analytics.

What is a funnel in Google Analytics

In the previous chapter we learned about goals and conversions. A funnel is the set of steps or pages that you expect users to visit on their way to complete the conversion. In other words, a funnel is a sequence of steps which leads to completion of a goal.

Why to use funnels

1) Analyzing funnel activities helps in assessing the effectiveness of your web site in pursuing visitors to continue to the next step towards conversion.

2) To understand from which pages visitors abandon the funnel and where they go after that.

3) Analysis can lead to streamlining the important processes, such as the checkout process or sign-up process which can enhance the conversion rate.

Building a funnel in Google Analytics

Setting up funnels in Google Analytics is an optional process in defining goals. As demonstrated in the previous chapter, navigate to the Goal Settings page.

Notice the Define Funnel section shown in the following screenshot.

To define your funnel: 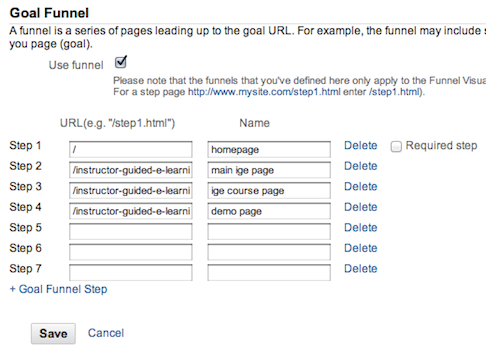 Required Step: When this option is checked, visitors reaching your goal page without traveling through this funnel page will not be counted as a conversion.

This report illustrates where users entered the navigation process and how they followed the funnel until they left the funnel, exited the web site or reached the goal page.

Boxes on the left show how people arrived into the funnel and where they came from.

The boxes on the right hand side show how many people abandoned each step and where they went. 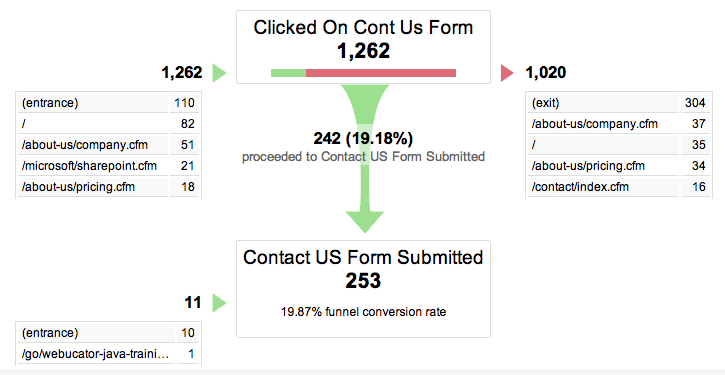 Exercise for Interpreting the Funnel

The right hand side shows the exit paths. In this example, 17 people exited the funnel at the entry point itself. After completing the first step no one has exited our funnel.