Influence is an essential skill in business. Here are 15 techniques that can help you build your skillset.

When reading this blog, think of a specific business goal you are trying to achieve. How can you use these influence techniques to achieve your goal?

END_OF_DOCUMENT_TOKEN_TO_BE_REPLACED

There’s a relative newcomer to the world of JavaScript front-end frameworks that’s attracting a significant amount of attention among developers, Vue.js. In this blog post, I’ll tell you what all the buzz is about. We’ll look at the main points you need to consider to make an informed decision about whether to get on board with it. Finally, we’ll take a look at the best resources on the web to help you learn Vue.

END_OF_DOCUMENT_TOKEN_TO_BE_REPLACED

Data science is one of the fastest growing career paths.

There may be up to 250,000 open data science jobs by 2024 in the United States, according to a recent InfoWorld article.

For companies and professionals looking to gain a foothold in the rapidly progressing field, there are many choices of technologies and tools.

Below is a list of the top Data Science topics, technologies, and tools to explore.

END_OF_DOCUMENT_TOKEN_TO_BE_REPLACED

From talking with hundreds of clients, I’ve discovered that learning Microsoft Word is an ongoing process. Even experienced users can learn new tricks and save time with powerful tools like advanced styles and templates.

When it comes to Microsoft Office software like Word, Excel, PowerPoint, many of us are self-taught. While that might work to a degree, consider how much time can be saved when you learn the productivity tools in Microsoft Word. Think about how your documents would look far more professional by learning the Microsoft Word advanced formatting tools.

In addition to learning new tools and features of Microsoft Word, learning Microsoft Word keyboard shortcuts can also be a fantastic way to claim back time in your work day.

After talking with hundreds of Word users and expert Word trainers, I compiled a list of the best resources that have been shared over the years.

END_OF_DOCUMENT_TOKEN_TO_BE_REPLACED

With a fast-changing technology landscape, relevant certifications ensure you are ready to adopt new technologies and integrate new strategies.

Many blogs have reported on the top paying certifications, which is helpful if you are just starting your IT career, or are considering a career change.

Getting more into the specifics, we can also explore certifications based on role. For example, which certifications are best if you are focused on big data? Which are relevant for demonstrating your cloud expertise?

Here are the top certifications for each IT skill set.

END_OF_DOCUMENT_TOKEN_TO_BE_REPLACED

In the United States, twenty percent of adults have a disability, according to the Centers for Disease Control and Prevention. Disabilities that may impede a person’s ability to use a website include:

The World Wide Web consortium (W3C) defines accessibility as the practice of insuring that people with disabilities can perceive, understand, navigate, and interact with websites and tools, and that they can contribute equally without barriers.

END_OF_DOCUMENT_TOKEN_TO_BE_REPLACED

If you’ve ever worked on a large website as part of a team, or even if you’ve ever worked on a small website with a long history, you know that one of the first things that can get out of control and cause maintenance nightmares is the site’s CSS. After a while of people making one-time changes and additions, it often seems like every additional change breaks something else.

For this reason, various people have come up with strategies and best practices for keeping CSS under control. In this article, I’ll discuss a few of these best practices and then show how using a CSS framework such as Bootstrap 4 can make doing the right thing almost effortless.

END_OF_DOCUMENT_TOKEN_TO_BE_REPLACED

Have you been hearing that Power BI is the best and easiest way to analyze and visualize your company’s data? 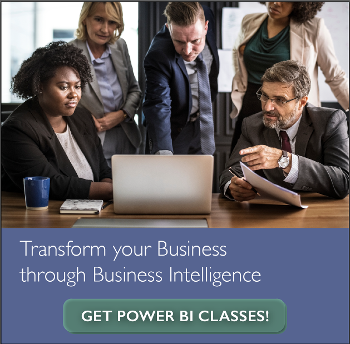 Are you interested in learning how Power BI can benefit your organization?

Keep reading to find out how to start using Power BI.

END_OF_DOCUMENT_TOKEN_TO_BE_REPLACED

Bootstrap is the most popular front-end CSS and JavaScript framework for designing responsive websites. According to W3techs.com, approximately 20% of websites currently use Bootstrap. There’s a good chance that if you’ve done any type of work on the web, you’ve encountered Bootstrap.

With the recent release of Bootstrap 4, the millions of websites that currently use a previous version face the decision whether to stay with version 3, upgrade to version 4, or transition to a different solution. Unless you’ve been paying close attention, you may not be aware of the differences between Bootstrap 3 and 4 and the issues that will likely determine whether you should upgrade or use Bootstrap 4 for a new website.

Read on to learn more about how Bootstrap 4 can improve your website.

END_OF_DOCUMENT_TOKEN_TO_BE_REPLACED

The days of the simplistic, one dimensional OS are over. Industry requirements for more flexible processing of data and increased security postures have mandated an entirely new breed of operating system.

The advent of secure hybrid systems and virtual network fabrics have made these advances possible.

Windows Server 2016 moved forward on the hybrid front by Integrating Microsoft Azure services into its on premises Active Directory environment. Server 2019 builds on these advancements to provide additional flexibility and security.

Let’s take a look at the four major improvements that Server 2019 provides.

To make hybrid integration more secure and easier to administer, Microsoft has introduced some new features in Server 2019.

Windows Server 2019 has many new enhancements that can make your IT life easier and more secure.

Webucator offers Windows Server classes that are delivered by Microsoft Certified instructors. Meet with your instructor in a virtual classroom for a public class. We also offer private classes in which the instructor comes onsite to your location.

Jay Cotrone has been providing IT Training for nearly 20 years. He is a Microsoft Certified Trainer for Windows Server and Windows. He is also certified in CompTIA Security+ and Network+.